Originally from Bergerac, the son of a cook father who introduced him to the world of pastry making, it was with Monsieur Dieumegard, now considered his Mentor, that his interest in cakes turned into a real passion. With great creativity and keen on work, he joined the Spanish pastry team at the world championships. After having worked passionately, he obtained the title of World Pastry Champion in 2011 then Best Pastry Chef in 2014. His career as a great Pastry Chef began when he joined The Peninsula in Paris in 2014 then when he became Executive Pastry Chef of the Pushkin Café in 2016. But it was at the Bristol, alongside Eric Frechon, that his fame settled and that he became one of the most talented chefs of his generation.

A new adventure begins for him at Ladurée and we are proud to welcome him.

"I have always had a particular admiration for Maison Ladurée. It symbolizes a heritage of historical know-how and thus contributes to the promotion of French heritage in France but also internationally. Today I am very proud and honored. to embody the new face of the House, to contribute in my turn to its influence."

As part of a responsible approach and culinary innovation, the House has devised two new recipes for vegan macaroons.

Discover our vegan macaroons in our composing boxes.

In this summer season, the House has chosen to give pride of place to hibiscus, a large flower with bright colors and a tangy taste.

Let yourself be tempted by the iced macaroon, the nun or the pot of hibiscus ice cream, available in our Click & Collect stores.

Reinforcing La DoubleJ’s commitment to celebrating women and wellness, the collaboration draws upon the deeply personal and spiritual practice of the brand’s founder, J.J. Martin, and dives into themes of motherhood, fertility and the spiritual concept of the sacred feminine. This is realized through the Tree Of Life print, a verdant La DoubleJ artwork, designed in-house in honor of the ancient Tree Of Life archetype, a symbol of fertility, renewal, life cycles and all types of motherhood for everyone. 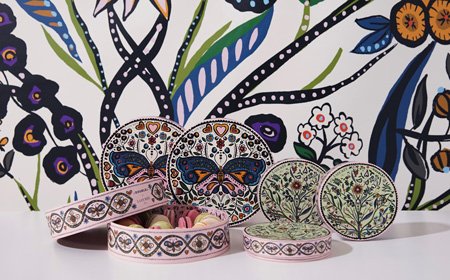 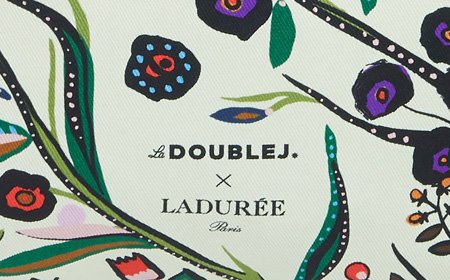 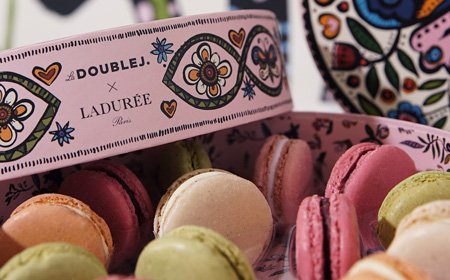 Broadening our horizons, expanding our perspectives and moving forward without ever losing the most important thing: our tradition. This is the perpetual motion that Maison Ladurée has been engaged in for years, and it is within this objective that we are delighted to partner with Patrice Chapon, a great French artisan chocolatier, for all of our coming chocolate bonbon collections.

Chocolate is a passion that consumes you. Tasting it is an art, it is a symbol of delectable indulgence, a delight of nature. Chocolate is a genuine saga. It has different stories to tell us about its origins while taking us on journeys around the world. It is raw but refined and creative, the tiniest piece tasted provoking intense emotions. It is precious, but the Master Chocolatier elevating it for us is what makes it irresistible rather than the technique. 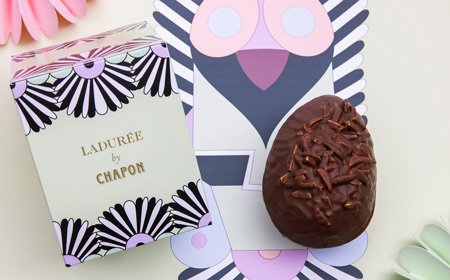 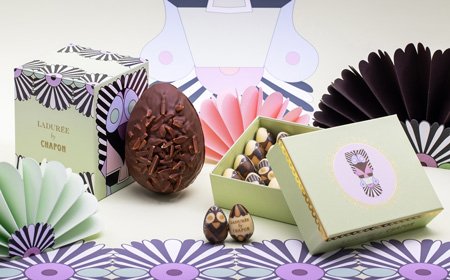 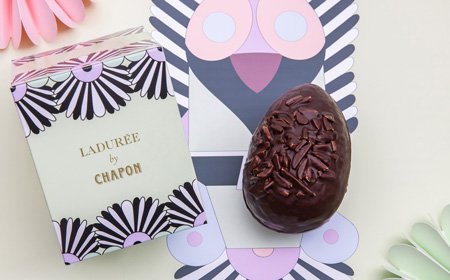 A Traditional Christmas at Ladurée

For this Christmas collection, I wanted to be inspired by "Blanc Manger", the signature dessert of my gourmet restaurant, Le Grand Restaurant. Based on the original recipe, we have declined its flavors while working on lightness in the mouth, in order to find the perfect harmony between vanilla and caramel and to offer a log and a macaroon that reminds me of these aromas that I love so much. You will also discover a macaroon and a cake, both inspired by a dessert that I particularly like and which combines the acidity of clementine, the sweetness of rose and the radiance of saffron. 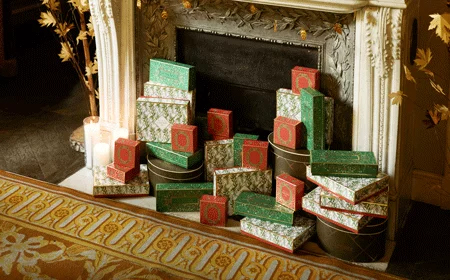 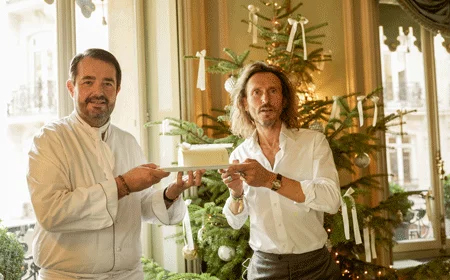 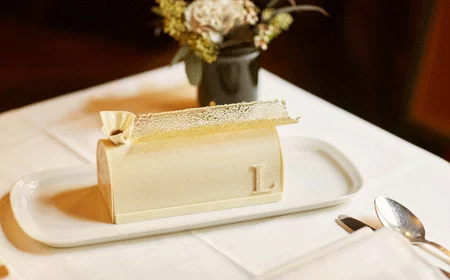 This macaron is inspired by Jean-François Piège's iconic recipe for Blanc Manger. Two macaron shells dusted with vanilla seeds, with a vanilla ganache filling and a caramel center.

Discover these macarons in our gift boxes, available with home delivery.

Enjoy our menus at home !

Maison Ladurée launches its own savoury range to go to enjoy our creative meals at home.

Everyday, our chefs and their team, cook with the most care by sourcing seasonal products to make delicious recipes.

Taste our iconic dishes like our avocado toasts, our Venice Beach salad, our poke bowls or our delicious Ladurée club sandwich. These seasonal dishes could go along with our different desserts like our chia puddings, our compote, a fruit salad or a three macarons assortment to finish your meal with a sweety touch.

Get delivered in Paris (limited to a distance of 5km around our Rue Royale (8th arrondissement) store thanks to Deliveroo and Uber Eats.

We all know the challenges we face today : eating better, eating less, eating sustainably-made food that is healthy and protects the planet’s resources. Eating less animal-based food. Opting for plant-based even when it seems undoable.

How can one make that a reality with macarons? How can one sidestep the egg-white and sugar mix needed to make the double shell? How can Frenchmade pastry forgot butter?

It has required months of research, technical expertise, and the collective commitment of passionate teams to find the answers to those questions. And the result is striking; truly, you’ll be fooled.

A real sweet with really strong caramel notes. We had to prepare a "butter without butter" composed of coconut oil, sunflower oil and soy milk.

A CHOCOLATE MACARON : PURE ORIGINATE FROM PERU 70% of cocoa

Promise of a safe bet, with really light woody and smoked notes. We had to reinvent the ganache with a mix of millet, almond and hazelnut milks.

Click here to discover our new vegan macarons, available in our macarons boxes to compose.

As we approach Valentine's day, enjoy our delicious tea-time composed of :

Reserve now your tea-time within one of our following restaurants : Ladurée Champs-Elysées, Ladurée Royale, Ladurée Bonaparte

The holiday season brings a delightful cosiness to the crisp cold of a Canadian winter, while the glistening backdrop of pure-white snow adds even more romance. Twinkling lights and log cabins are just some of the many charms that suffuse Canada with such a wonderfully joyous atmosphere at this magical time of year.

Ladurée’s CEO, David Holder, was so taken with the generosity and warmth welcome he received in Canada that he decided to make the country this year’s holiday theme for Ladurée. And when he met well-known Canadian restaurateur and pastry chef Patrice Demers, everything fell into place. 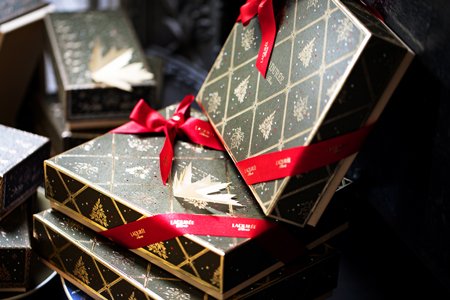 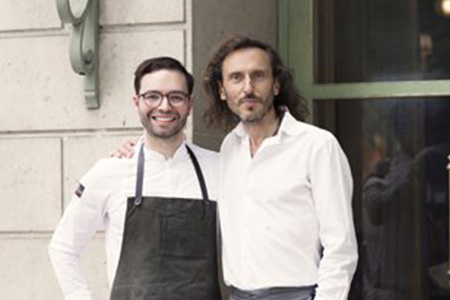 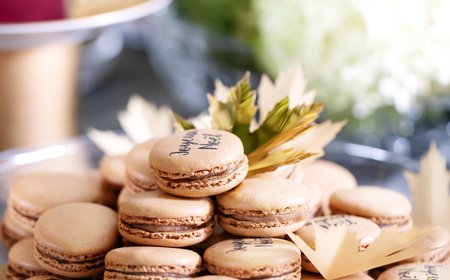 The inspiration for this macaron comes from maple pecan pie, a variation of sugarcream pie in which brown sugar is replaced with maple syrup. Delectable!

The haskap shrub, also known as blue honeysuckle, grows deep in the Canadian forest. Rich in vitamins A and C, as well as fibre and potassium, its tangy berry is a natural antioxidant. Ever inventive, at Ladurée, we have made it into a delicious jam filling for our macaron shells.

Ladurée’s chefs have concocted a macaron filled with a chocolate ganache infused with Labrador tea – a wild plant native to Quebec with a delicate minty flavour and hints of citrus. For extra decadence, their new macaron is coated in an enticing dark chocolate! 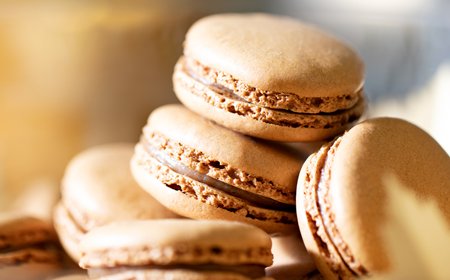 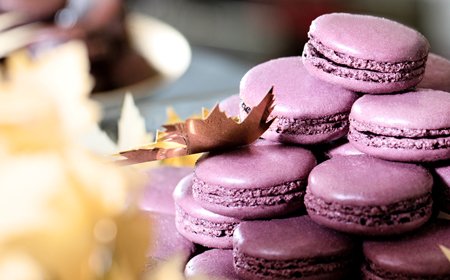 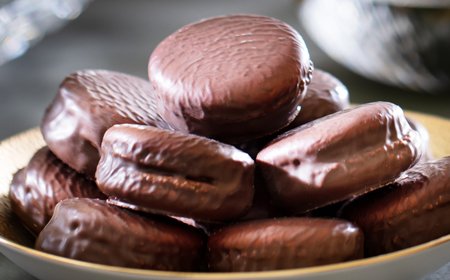